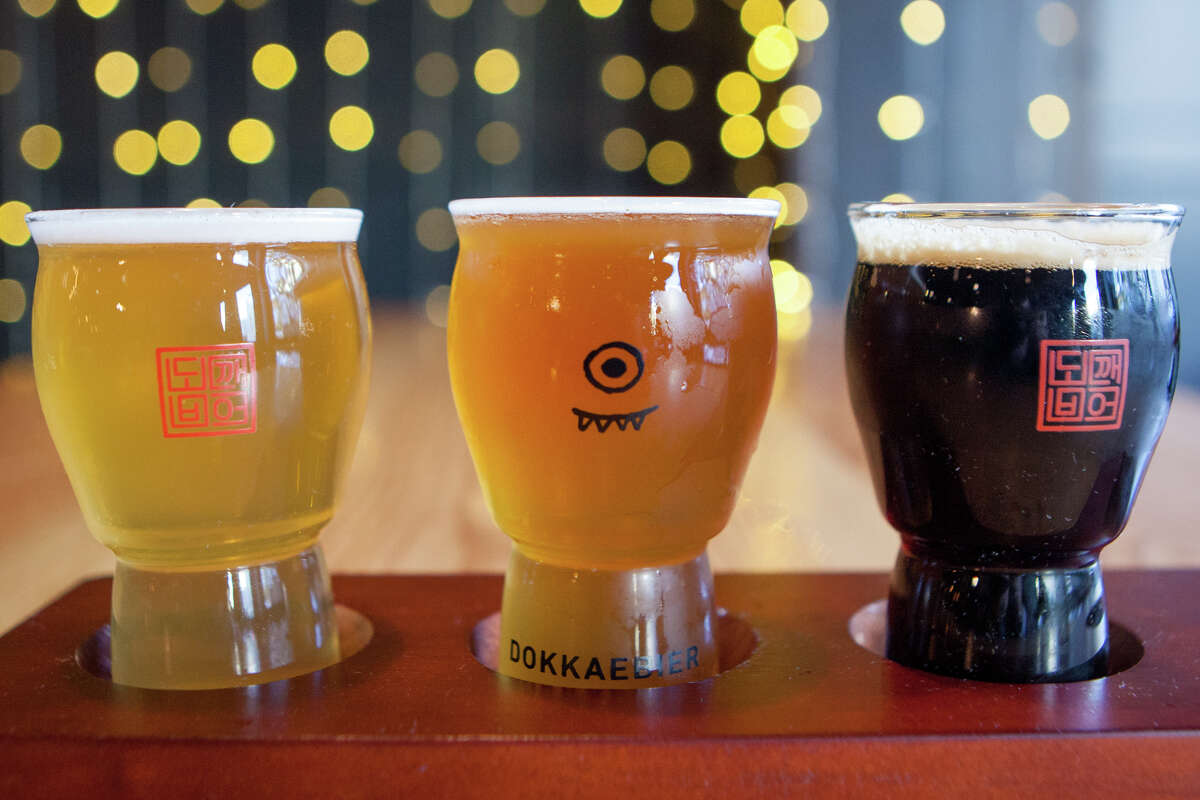 One’s a crisp, pale pilsner, made marginally sweeter than its German counterparts thanks to the use of bamboo leaves. Another, a witbier, is briefly tart — that’s the omija berry — before it gives way to the backend heat of gochugaru chili. Last is a roasty stout, spiced with cardamon and green peppercorn.

These beers were imagined by Youngwon Lee, a Korean-American opening a new pop-up taproom and restaurant, Dokkaebier, this month on Polk Street. It's just the beginning; through April, when its run ends, the bar will serve Lee's locally contract-brewed craft beers utilizing Korean spices, fruits and plants, and serve a food menu created by world-class chef Daniel Wright, former chef de cuisine at Saison.

The menu is rounded out for now with beer from friends' local breweries — like Del Cielo in Martinez and Alameda Island — and eventually, Lee hopes to fill all of the bar’s 40 taplines. Next up will be a traditional West Coast-style IPA, but after that, Lee’s hoping he can dial in a recipe using bacteria from kimchi, and another riffing on hangover cure drinks currently popular in Korea.

There may be no one better suited for the execution of such a project than Lee.

Lee was born in Korea, and raised in Guam and New Jersey, before he briefly attended school in California. He might have stayed stateside, but his grandmother back in Korea had become ill, prompting Lee to take a leave from college to see her. While there, he found part-time work at a high-end wine and spirits import company called Indulge.

In 2014, Lee decided to set out on his own, launching his own imports business and then, a wine-tasting bar in Seoul. His turn in getting into the beer industry was a bit unexpected, and, as it turned out, the result of a misunderstanding.

Lee had customized sales software to work specifically for alcohol-related companies, which attracted the interest of a local brewery in Korea called The Booth. The brewery’s CEO initially thought he was an engineer; upon learning Lee was in sales and marketing, The Booth poached him after months of negotiation. Once hired, Lee was convinced to head back to California, where the company had recently opened a Humboldt-area brewhouse.

After working to expand the The Booth’s brand for several years, and assist in distributing the beer around the Bay Area, Lee decided to again set out on his own for what would become Dokkaebier.

"I wanted to do something unique and different," he says. "I [felt] a lot of good energy from the beer industry; [they’re] very friendly, [they] help each other. And I wanted to bring that out in my company. Our tagline is ‘Eat, drink, play,’ so I want this place to be [where you] come meet, drink and just hang out in a fun place."

The name Dokkaebier comes from the Korean dokkaebi — a sort of sprightly ghost or goblin-like spirit in Korean mythology that likes to play with humans.

"[A dokkaebi] always has a positive energy and it's fun," Lee says. "It hides in objects in the daytime; it comes out at night and it likes to drink, eat and hang out with people."

It made sense for Lee to name his new Polk Street pop-up after the mythical creature — he wants this space to be social, but unique in concept, paying tribute to his home of Korea.

A big part of that tribute will be communicated through the food. It will all be Korean-inspired, says Chef Wright, and once Dokkaebier’s full menu is implemented later this month, Wright will focus on utilizing fresh and cooked seafood, including Kusshi oysters with a variety of ponzu and seaweed toppings, Korean fluke with Nori chips, spicy octopus and caviar "if people want to get fancy." 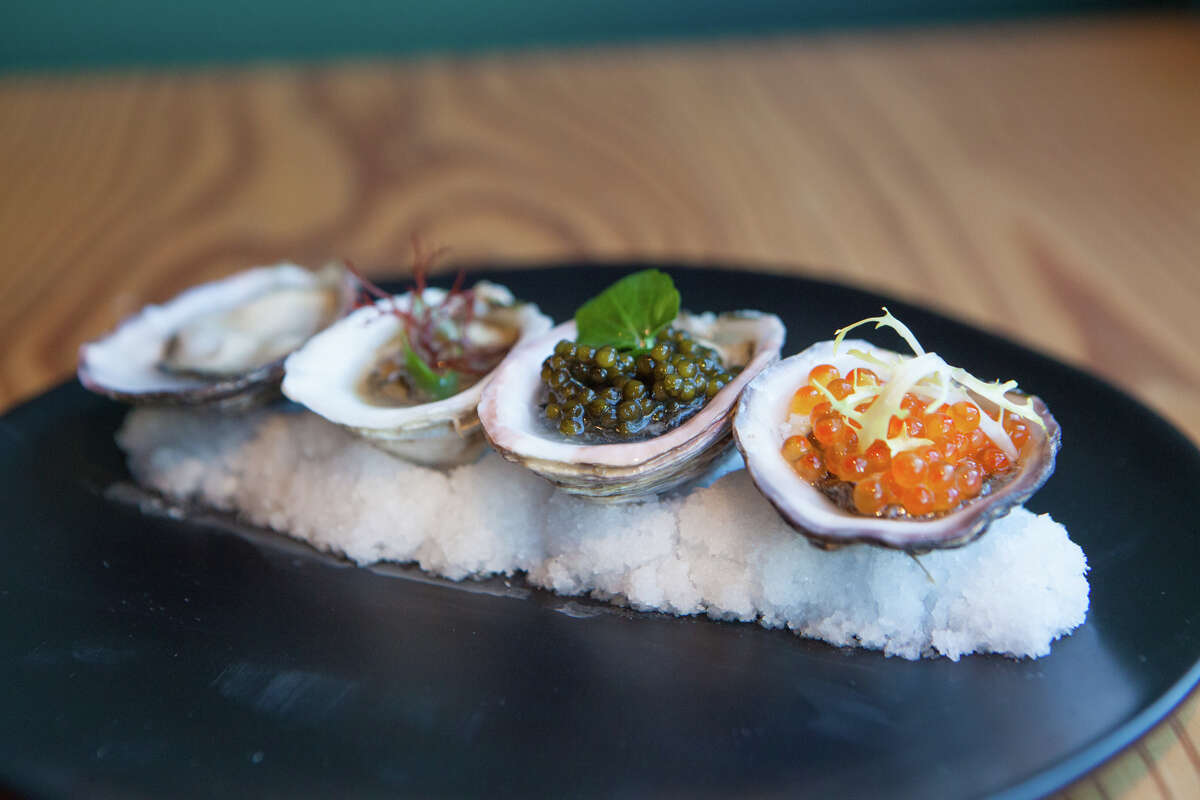 Wright also plans on more traditional Korean comfort food, but with a seasonal spin: spicy fried chicken wings, short rib and snacks like fried rice fries and poke rice cakes with a variety of dipping sauces. For now, Wright’s working with a limited menu, but everything nevertheless will be meant to complement the beer.

"What we're really trying to do here is promote the beverage," Wright says, "to promote the name, Dokkaebier, and to get the products into the customer's hands so people get to taste what we're doing."

Lee hopes the pop-up is just the beginning. He plans to make fans out of San Franciscans by way of selling cans of their beer and merchandise at the bar soon after opening, and then to put down roots. After the pop-up ends in April, Lee’s looking to secure more permanent taproom space in San Francisco — which would ideally include a brewhouse.

"As we get this started, I'll be out on the market and trying to find a new place to open," Lee says.

For now, he’s just preparing to debut the new space.

"I don't want [this] to be a place where you just come in for dinner or come in for drinks," he adds. "I think by having a good balance of [food and drinks], you stay longer, you have more fun. You have a better experience."

Dokkaebier, located at 1735 Polk Street in San Francisco, will be in a soft opening phase with a limited menu beginning Friday, Feb. 7, 2020. A grand opening will be announced later this month.